Chart of the Week!

Chart of the week!

Stock Bulls Look Toward $17 Trillion Burning a Hole in Pockets 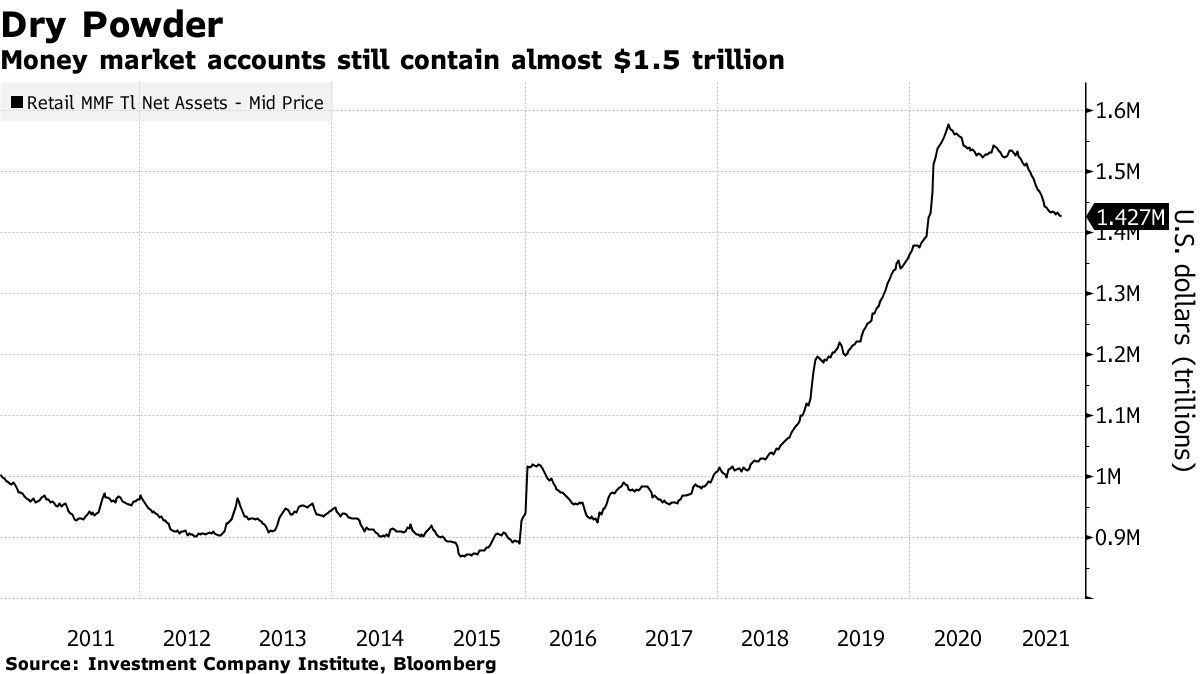 In the stock market, the refusal of retail investors to back down from every macro threat has become the only story. When will it end? Judging by the size of all the pools of cash lying around, it could be a while.

Among all the economic stories of the pandemic, the one about money piling up in people’s accounts has been the most significant in the stock market, where the S&P 500 just notched its seventh gain in nine weeks. Money market accounts, viewed in some circles as a “dry powder” reserve for equity deployment, sit at just under $4.5 trillion. A more obscure balance, the Federal Reserve’s count of money on deposit with commercial banks, has risen 33% from 2019 to $17 trillion.

While none of the money is completely unencumbered and professionals tend to hate the concept of “cash on the sidelines,” something is arming the day-trader cadres who seem bent on letting no market selloff last more than 24 hours. Take Monday, for example, when fears the delta variant would upend progress sent the S&P 500 down as much as 2.2%. Dip buyers ran to the rescue then and the rest of the week, sending the S&P 500 higher by almost 2% through Friday, despite virus cases still allegedly spiking.

“We have investors who are eager to deploy cash,” said Sara Rajo-Miller, investment advisor at Miracle Mile Advisors. “People sometimes forget how much power retail investors can have over the market, and we’ve seen that play out clearly. That momentum can really push stocks higher.”

How powerful is the retail cannon? On Monday alone, they bought a record $2.2 billion worth of equities, with the biggest exchange-traded fund tracking the S&P 500, ticker SPY, alone notching an all-time high of $482 million in retail purchases, according to Vanda Research. An analysis from DataTrek Research showed that Google searches in the U.S. that day for the phrase “dow jones” -- the term most associated with stock market investing, according to the firm -- spiked when stocks declined quickly, peaking at 1 p.m. in New York.

“It’s almost like investors are seasoned to say, stocks are down, it’s got to be a buying opportunity,” said Gene Goldman, chief investment officer at Cetera Financial Group. “Part of that is because there’s no other game in town right now. You look at bond yields so low, cryptocurrencies struggling, other parts of the market are not that great.”

The unending appetite for stocks led equity ETFs to break their annual record in April, and the pace hasn’t slowed since. In July, the products have already taken in more than $15 billion, helping fuel total ETF inflows to the brink of a full-year record, with more than five months to go.

Still, other measures of retail prowess show a mixed picture. Data from Charles Schwab shows that the percentage of cash in their clients’ brokerages accounts in June fell to 10.5%, the lowest since 2018.

That probably suggests that the dry powder has been put to work over the course of the year, but maybe it’s not entirely out of fuel for further investment,” said Jeffrey Kleintop, chief global investment strategist for Charles Schwab & Co. “There’s still a good bit of momentum and desire to put money to work and look for alternatives to the bond market which remains relatively unattractive.”

Retail money fund balances still have $1 trillion versus $643 billion in 2015, according to DataTrek, with analysts calculating that there’s $400 billion in “buy the dip” cash ready for the next drawdown. Plus, retail-favorite Robinhood has 13 million more funded accounts than it did before the pandemic.

“The buy-the-dip mentality is the one the Fed has taught institutional and retail investors to follow, and the Fed remains hyper easy,” said Jim Smigiel, chief investment officer of SEI. “The biggest positive out there is that the easy stance from the Fed is in place and every other central bank and is going to be in place for quite some time.”